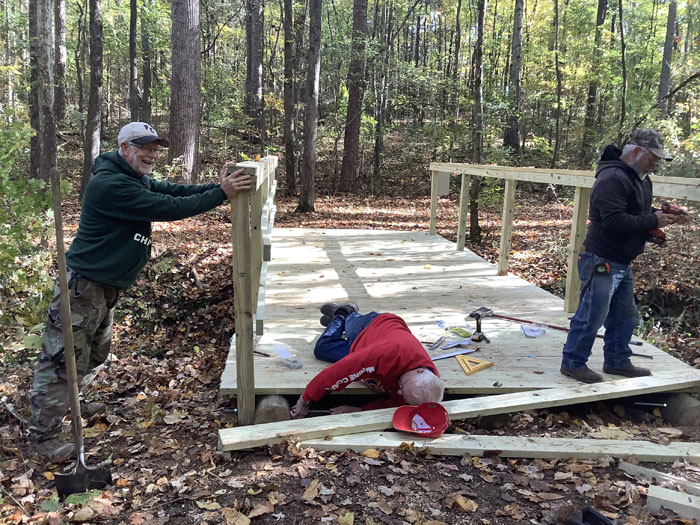 CHINA GROVE — Jennifer Drye was excited for a few weeks because she had China Grove Middle School’s first cross-country meet a few days ahead and the initial class was pretty much ready. His team had been training for a week before the start of the school year. She also had hopes of rebuilding an old bridge and opening up the school property even more for more cross-country skiing opportunities. Another goal was to partner with the South Rowan High School team and have them use the wooded trails for their home course as well.

The 55-acre property began in 1914 as Rowan Farm-Life School. The state legislature had approved funding for agricultural schools where many students would live on campus while raising and processing their own food. The China Grove School, the second in the state, was so successful that in 1921 China Grove Ordinary High School merged with it and shared the farm campus which later became the middle school.

Drye, a second-grade teacher at China Grove Middle, said: “Our cross-country plans started last year when some parents and students pitched the idea to athletic director Lisa Faggart. She and I talked, decided to take the plunge, and got higher than expected interest from students. It was important for us to have a season, which resulted in four games in total, including one at home.

As a freshman in high school, Drye practiced every afternoon by running a mile on the track. She increased her mileage in college and then running became fun. She said: “Then I challenged myself to see how far I could go. 5K, 10K, half marathons led to a full marathon in 2018 at Disney World. I still love running today and have loved using my knowledge to train my distance runners this season.

This home meeting hosted Kannapolis, Mooresville and Erwin. South Rowan coaches and crew were on hand to volunteer. But something just as big was happening with friends from school. A plan has been drawn up to rebuild this bridge, replacing the one that was last built around 2000 and had deteriorated so badly that only the brave would venture there. Former students remember this bridge replacing an early 1980s version.

First on the wish list were three long posts from the thickness that would support a heavy bridge spanning about 25 feet. Duke Energy provided utility poles and training supervisor Mark Beaver said: “Only good can come when the local community and businesses work together to benefit our schools and our children. It shows that we care, and our donation secures the future of the cross-country ski trail and bridge. We hope they have continued success.

Then the old bridge had to be removed before the massive posts could be placed properly to span the creek and the 8 foot drop from trail level. China Grove City Public Works Director David Ketner and Deputy Director Rodney Wilhoit devised a plan to remove the old bridge once the old planks and rails had been chain-sawn. Wilhoit and Ryan Oliphant came back with a backhoe and loader and removed the old bridge.

Ketner then ran the show when his team was able to suspend each pole under a front-end loader and lay them down the length of the creek. Tommy Suther and Ted Misenheimer of China Grove First Baptist Church Men in Mission checked the proper alignment and leveling of the posts.

Ketner said, “With China Grove on the verge of huge growth, we were thrilled to help build the bridge. We hope it will be used for many years for fitness and outdoor educational opportunities.

There remained the actual acquisition of the necessary wood and the construction of the bridge. Jerry Lippard of First Baptist compiled a list of materials which was presented to owners of Cozart Lumber, Thad and Phillip Whicker. Thad said, “As lifelong residents of Rowan County, alumni of China Grove Middle School, business owners and parents of children who attended school in Rowan County, Phillip and I understand the need to maintain the assets that Rowan has to offer our young people. We view providing materials for this bridge as an investment in the county that has done so much for our families. Our county is fortunate to have people who have the talent and the time to put this bridge back in place.

The First Baptist crew returned last Saturday to lay the flooring and handrails on the bridge and completed the project Wednesday afternoon with Andy Coffer, Jimmy Carter and Trent Drye joining Suther, Misenheimer and Lippard. Pastor Drye said, “We know that God has placed us in this community to make a difference, to be his hands and feet and to move the gospel forward. To do this, it is important to associate with the community in which God has placed us. We are committed to serving and collaborating with local schools, city, businesses and other ministries to advance the love of Christ. When we all work together, God is glorified and lives are changed.

Faggart summed up the combined effort and what it means for his school: “Cross country was a prep year for me. As the numbers went down for soccer, I looked for a way to keep the athletes moving and fit. Ms. Drye is passionate about her own health, as well as the students. She pushes them with running and HIIT workouts that she does with them to encourage them. The coaches at South Rowan helped us finalize the current course and the interview will be key to its success. This combined community effort is not only for China Grove Middle, but I hope secondary schools and the community can also use it. Plans are to take top notch 5K courses for high school and 3K for college. Our yards provide a safe place to run, walk and simply enjoy the outdoors.

How to Start an LLC in South Carolina: A Step-by-Step Guide

Student Loan Refinance vs Consolidation: What’s the Difference and Which Should I Choose?