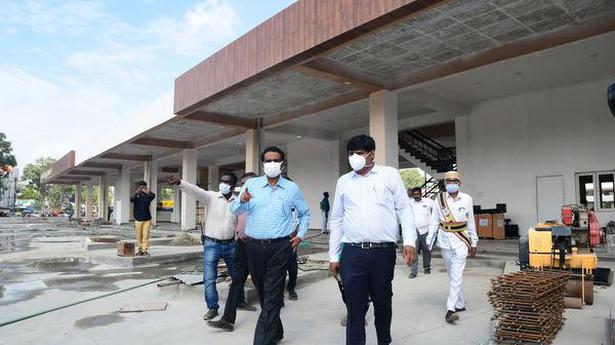 About 95% of Periyar bus stops are working

About 95% of the works at the Periyar bus stop, carried out as part of the Smart City project at a cost of 174.56 crore, have been completed, city administration director P. Ponniah said on Saturday.

The official inspected the Tamukkam grounds where massive infrastructure, including a state-of-the-art auditorium, amounted to 45.55 crore, a 23.17 crore road bridge to Kuruvikaran Salai Road connecting the north -south of the city through the Vaigai among others.

During a review meeting held in Anna Maligai, city officials, led by company commissioner KP Karthikeyan, presented an overview of the work being carried out at different stages.

Later, speaking to reporters, Mr Ponniah said the bus stop, located in the central part of town, was ready for the grand opening. “There is some final work to be done … The bus stop has a lot of features for the good of the public,” he added.

In the first phase, the bus station would become operational. In the second part, the old bus station of the shopping complex, which was also undergoing a facelift, would take a few more months to complete, he replied and added that the covid-19 pandemic and the recent rains had slowed the pace of work.

However, he hoped that the work would soon be speeded up and that the city could experience decongestion once the development work was completed.

He said the funds were not a constraint for laying or repairing roads, which were damaged by recent rains.

As part of the AMRUT program, the government had offered to deliver drinking water from the Mulla Periyar River to the city of Madurai at a cost of â‚¹ 1,295.75 crore. About 30 lakh liters of water would be stored in an OHT in Melavasal, Thideer Nagar, he said and added that the drinking water distribution would be sustainable and meet the expectations of residents of the 100 neighborhoods.