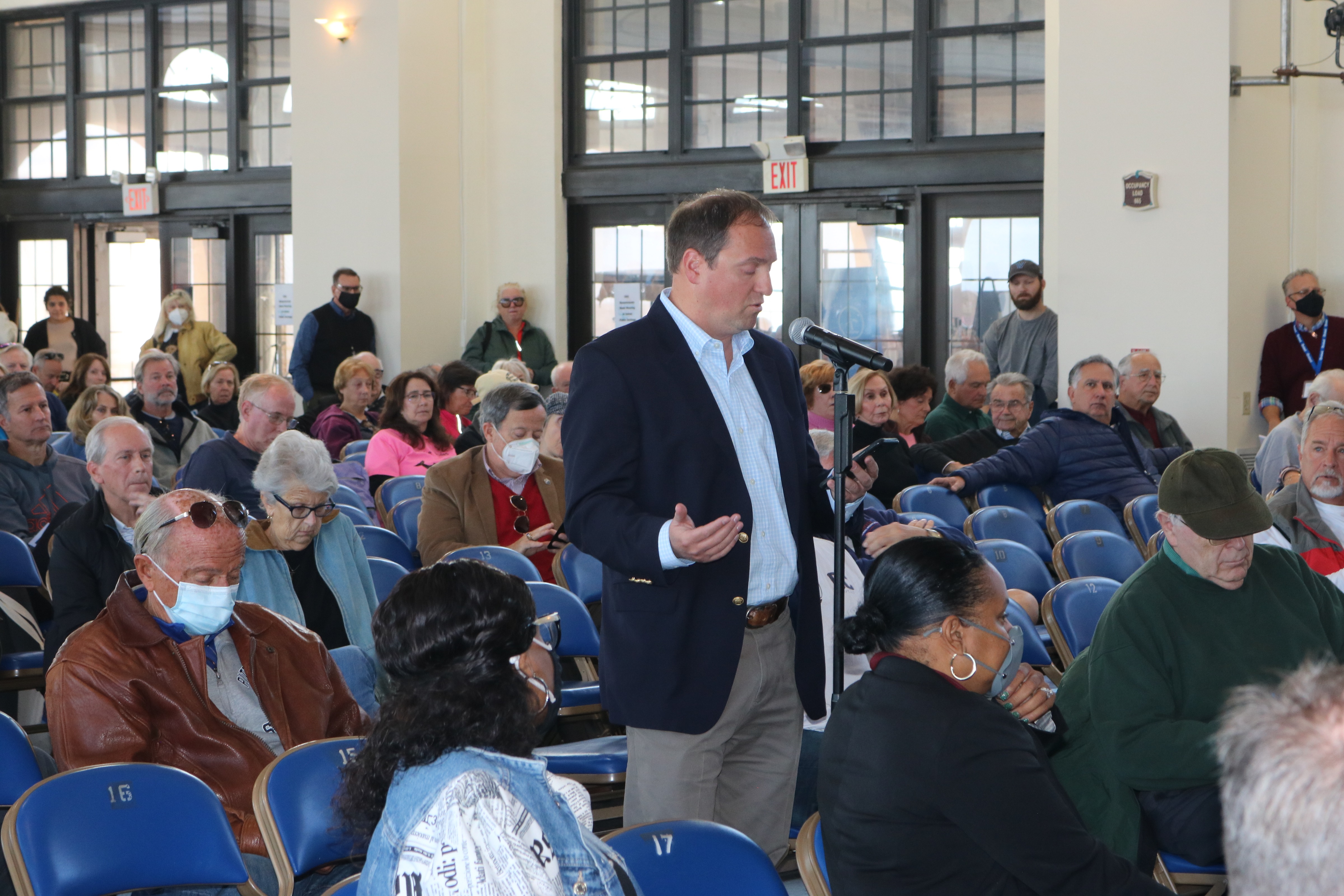 An open house in Ocean City on Saturday to discuss the pros and cons of an offshore wind project, proposed 15 miles off the south coast of Jersey, sparked interest, concerns, questions, opposition and support.

The event was held to educate the public on the status of the project, but much of the forum at Music Pier was a question-and-answer session between the public and the developers of the wind farm.

Several speakers raised concerns about how the project could affect tourism, the visual impact of huge offshore wind turbines and what it would do to marine life, migratory birds and the fishing industry. commercial fishing.

Some people said the project was vital due to climate change and the need for clean, renewable energy. Others spoke of creating jobs for residents of southern Jersey. The project, dubbed Ocean Wind 1, is proposed as a 1,100 megawatt project that would create thousands of construction jobs and power more than half a million homes.

A member of the public, Craig Stuart, of Ocean City, posed three questions to Orsted, the Danish energy company that would develop the wind farm in partnership with New Jersey-based PSEG.

Can you move the wind farm from the shore? What is the appropriate cost of the electricity produced by the wind farm for each owner in New Jersey? And how does that benefit owners? Stuart asked the Orsted reps who were seated on the Music Pier stage.

“We can’t go further than 27 miles,” replied Maddy Urbish, Orsted’s government affairs and policy manager for New Jersey, who answered most of the questions from members of the public on Saturday.

â€œWe would like not to see the wind farm from the shore,â€ Stuart responded to applause from some attendees.

He noted that he felt the project was not beneficial for the region.

â€œIf we don’t get any benefit, we’re not going to support it,â€ Stuart said.

Among Orsted’s representatives on the panel were Pilar Patterson and David Hinchey.

Patterson noted in response to concerns from Stuart and other participants that the project has yet to go through regulatory review by the Bureau of Ocean Energy Management. She also said there would be another opportunity to revisit the plan.

The cost of electric bills for a typical house in New Jersey would increase by $ 1.46 per month for 20 years. This figure could vary depending on usage, noted Orsted representatives.

Each of the wind turbines is approximately 900 feet high. They would stretch along the coast from Atlantic City to Stone Harbor about 15 miles offshore, passing through Ocean City.

The project, as Paterson pointed out, is still in a rigorous government clearance process. It should last two years.

A problem raised by a few participants was the underground cables of the project.

Representatives from Orsted have discussed with Ocean City the possibility of running underground power cables through the city to connect the offshore turbines to a substation next to the decommissioned BL England power plant in Marmora.

BL England is considered to be one of the sites where Orsted would link the wind farm to the onshore power grid.

There were about 200 people in attendance and a few hundred more listened to the virtual presentation.

Attendees included residents of Ocean City, members of the tourism and fishing industries, Ocean City Mayor Jay Gillian, several members of City Council and a host of others who filled the Music Pier for the forum for nearly three hours.

Some people stood in the back and looked at many renderings of projected views of the turbines, marine surveys, and a host of other images on display.

Ocean City Council Vice Chairman Tom Rotondi commented at the forum on a new state law that removes local oversight – known as the “home rule” – for the wind farm.

The law allows wind farms to obtain easements, rights of way or other property rights from any level of government necessary for the construction of the project.

The New Jersey Public Services Board, or BPU, would make a final decision if local approvals are denied by cities or counties.

Like Rotondi, other Ocean City council members recently said the law effectively strips Ocean City and other cities that would be affected by the wind farm of their rights to self-reliance, a centuries-old tradition in New Jersey. .

“It bothers me,” Rotondi said of the loss of autonomy. â€œI love the ocean. I love the woods. You took away the ability to negotiate in good faith. What was the thought process that led to our being deprived of our ability to defend our cities?â€

Urbish responded that Orsted remains committed to being present and available to the public on all their concerns.

â€œWe are working really hard to make sure we are as available as possible,â€ she noted.

Tricia Conte, who represents â€œSave Our Shoreline NJ,â€ a group of nearly 4,300 affected New Jersey businesses, owners, residents, fishing community and vacationers, has been one of the project’s most vocal critics. . She focused on the possible negative impacts of the wind farm on marine life, including the construction of the project.

â€œMy question is, how many ship trips does it take to build and get a turbine operational from start to finish? ContÃ© asked.

Orsted said it would take 10 trips.

Outside the Music Pier, Conte talked about the project with some people. Some of his organization’s anti-wind signs were posted on the promenade.

Among the political heavyweights who attended the event was former governor Jim Florio, who spoke in favor of the project.

He noted that he had a house on the shore in Sea Isle City and had traveled to Denmark, where he had seen the wind farms operating there.

“It’s a very good thing to do,” Florio said of the project, especially in light of climate change. â€œKeep up the good work. “

Bulakowski said the project will be good for the region, is necessary and will create jobs.

“As a member of the Carpenters Union, we applaud this project,” Bulakowski said, adding that the shutdown of the BL England and Oyster Creek factories had hurt unionized workers.

Members of the business community, however, have expressed concerns about how the project will affect small business owners.

Michael Chait, president of the Greater Atlantic City Chamber of Commerce, asked how small business owners could benefit from the project.

Urbish responded that Orsted works with local contractors for a variety of things – from work to be done on the project to purchasing supplies of personal protective equipment.

Vicki Clark, president of the Cape May County Chamber of Commerce, asked what Orsted would do for small business owners and how they could benefit from the project. She also explained how vital tourism is in South Jersey, as well as the fishing industry.

â€œWhat is the impact on the commercial fishing industry? They have real concerns about the fishing lanes, â€Clark asked.

Clark also asked what the visual impact would be.

â€œCape May County is a $ 6.9 billion (tourism) industry. What investments will Orsted make? she asked, if it ends up having a negative impact on tourism because of the appearance of the turbines.

Urbish said in part in response to his questions: â€œWe believe in coexistence and when it comes to tourism we will be good community partners. “