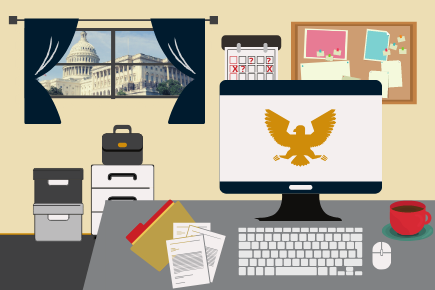 People of the Earth: Prepare for Back-to-School, or DaQuvalaHbe’chug blHoS

(For the benefit of those whose Klingon language skills have grown rusty, the rest of this report will be in English. Thank you!)

If you miss watching Star Trek after school or going to your federal office every day, rejoice.

A return to near normality (i.e. the old ways), if not total relief, is underway.

Citizens of planet Earth have seen incredible, even unprecedented, change in months, not centuries.

During this (hopefully) ongoing post-pandemic period, millions of people around the world, including approximately 80% of the US federal workforce, will be making an ongoing transition. No one saw it coming and now that it has happened, no one knows how it will play out. Will you return to your former workplace three, four or five days a week? Or will you be permanently working from home all but one out of two days a week/month? Is it possible you could do your federal job based in Manhattan or Los Angeles from a much less stressful and expensive location. Like North Dakota?

While telecommuting had been around for years, no one had seen it get to where it is today. At least not in the federal government.

The first surprise – thanks to COVID-19 – is that millions of people, who never dreamed of being able to work from home or at a remote location, have been doing so for two years. To the point where it’s the new normal.

Back then (2019), the concept of skipping the office, ditching your carpool, or commuting to work from home was a fading dream. For various reasons, the Trump administration was canceling the mostly anemic federal telecommuting effort. In the Departments of Interior and Agriculture, politicians were trying to dismantle the telecommuting agreements that had been reached with the union. Part of it was designed simply to hit the unions (who supported Hillary Clinton). Part of it may have been a sincere feeling that work should be done in the workplace, especially when face-to-face meetings with taxpayers/customers were part of the deal. Today, for better or for worse, the Office of People Management estimates that up to 90% of workers at some agencies and sites work, or until recently worked, from home. The transition to telecommuting and vice versa has shaken a lot of people. Returning people to the office is part of the hybrid post-work environmental guidelines.

Customer-focused agencies like the Social Security Administration and the Internal Revenue Service plan to bring many, if not most, telecommuters back to the office. Agencies that once hired people are now “onboarding” them. If you are unfamiliar with the term, the Klingon translation is wa’go’Dag.

Conclusion: Some – maybe many, maybe most – of you are about to undergo what the government calls the “re-entry” process or phase. AKA: Back to the office. Starting today, Social Security plans to resume treatment for clients who do not have appointments, although it still recommends them. The Internal Revenue Service this week (April 9) is also hoping that taxpayers in many parts of the country will be able to have walk-in appointments. But he still recommends that you call ahead.

In some agencies, many employees working from home or at remote locations may not have to go through the reintegration process. Or if they do, they will be working between two worlds: the home office and the office-office. They are also watching the private sector where in some places workers are telling their bosses they want to keep working, but not from their old (pre-pandemic) offices.

In the meantime, unions that represent more than twice as many workers as they have actual members are hoping to get creative when back to school. As part of its economic incentive program, the White House has made it clear that it wants as many Feds as possible to return to their offices to give customers more time and give local merchants the customers they have missed over the past two years. This is a big economic problem not just in the Washington metro area, but in other places – Ogden, Utah, Huntsville, Alabama and San Antonio, Texas – where Uncle Sam is a major employer/customer. , otherwise the main one. So what’s the next step? What are your hopes/projects? It would be fascinating to hear what you think of the “reintegration” process ([email protected]).

The only parallel texts (texts written in both languages) that exist in Klingon are Hamlet and Much Ado About Nothing, both of which contain a significant amount of interpretation by translators. This lack of accurate parallel texts leads to major inaccuracies in the “translations” of Klingon digital translators, which require substantial work for their algorithms to understand the contextual meaning, among other nuances of the language.

Ingalalla Falls set to benefit from $587,000 in spending on visitor facilities | The temperature